Here are some pics of my original stroker project completed in 2001.

This project was born out of a desire for more low-end torque out of my 245Ti.  Boost is nice and certainly effective, but I decided that a base of 2.1 liters is just not enough... not for me.  As it turned out, 2.3 liters is not enough either!  But rather than mess with something as complex as a V-8 conversion, I decided to keep the Volvo motor.  I believe in Volvo motors.  They are such sturdy hunks of iron with so much potential.  I just don't particularly believe in original specs.

This purpose of this project was to produce a bored and stroked B23FT with 2630cc of turbocharged, Volvo torque! Update:  A dyno session in 2005 produced a rear wheel torque
measurement of 323 ft lbs at 3200 RPM (18 PSI boost with 100 octane fuel)

This project began with the purchase of a used B23FT junkyard motor in January 1999.
This custom engine was completed and installed in April of 2001.

When I started this, I had originally planned to use the stock K-Jetronic fuel injection since I did not think at the time I could afford (or figure out how to install) a decent aftermarket EFI system.  I considered a stock EFI system from another Volvo but dropped it because of it's inflexibility.  This was many years before less expensive EFI alternatives were born, like Megasquirt.  But... since I eventually decided to go to the trouble to fit an EFI, I wanted it to be something more programmable.  What I ended up with was a complete and fully programmable aftermarket EFI system from Racetech - SDS (Simple Digital Systems).  They have a web site that fully explains this system. 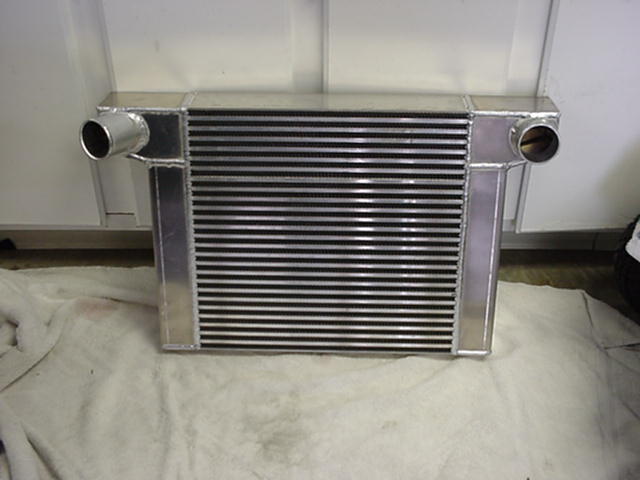 I had had a custom all-aluminum intercooler fabricated for use in this project.  It was made to my specs by Spearco Intercoolers.  It's really massive. This intercooler was basically made to OEM 240 Turbo intercooler dimensions, except that it's 3 1/2 inches thick.

Turbocharger was a Turbonetics "Super 60" (T-3 based) bolted to a later style turbo exhaust manifold.  It had a 60 trim compressor wheel and .63 A/R turbine housing.  Performance was pretty good, but the exhaust turbine came apart after about 2,000 miles.

Here are some pics of the damaged exhaust turbine and the pieces I found in my exhaust pipe. After that mishap, I moved to a standard T-3 turbo from a 240 Turbo, because I had one laying around.

Specifications for this Project:

Why bore the block to 97 mm?
The stroker parts supplier (no longer in business) sold me 97 mm pistons and claimed to be highly knowledgeable in Volvo race motors.  He insisted that boring a B23 to 97 mm was never a problem for him.  I have since discovered that boring a B23 block past the 96.6 mm second bore spec is NOT recommended.  The reason for this is because of a design problem common in many Volvo B23 blocks where the core had shifted slightly during the casting stage.  This made the cylinder wall thicknesses uneven and thin in some spots (sometimes... not always).  If one of these thin-walled blocks is bored too much, the cylinder wall becomes dangerously thin and would be prone to cracking.  This has happened several times to fellow Volvo enthusiasts who have tried a 97 mm bore.  I consider myself very lucky that my block hasn't cracked.  If you are unsure about your B23 block, you should have a Sonic Test done by your machinist to determine cylinder wall thickness before boring.  I have been told that a minimum thickness of 0.100" (2.5 mm) is recommended for a turbocharged engine. Assembled Deck Height: 0.40 mm (.016") below deck. Squish Height: 0.056" using Cutting Edge head gasket of 1.0 mm (.040") compressed. Update on Squish Height: This squish height dimension has turned out to be excessive.  It was used at the strong recommendation of Pauter Machine, who supplied the connecting rods.  They didn't know better and neither did I back in 2000 when this was done.  A better squish height would have been to set the pistons to be at or just above the deck at TDC, to a max height of 0.012" above the deck.  My next motor will use this configuration. Piston Source: WISECO PISTONS, INC. , 7201 Industrial Park Blvd., Mentor, Ohio 44060, (440) 951-6600,  http://www.wiseco.com/

Piston Side Clearance Issues:
When my engine was being completed, I had the machine shop set the piston clearance to the supplier's recommended figure of .004" (four thousandths).   Consequently, the pistons make a clatter noise when cold (piston-slap) and still some noise when warm.  I have since learned  that .004 inch is a bit much.  Mike Aaro of Unitek in Sweden recommended the side clearance for a forged street-driven piston of .0018 to .0020 inch (eighteen to twenty ten-thousandths).  For your project, you should consult the piston designers for these specs.. Head Used for this Project: Chambers were re-shaped slightly and valves unshrounded. The actual template used by my machinist is shown at left (measurements in this photo are in centimeters). <<< Here is an image of the #4 combustion chamber (measurements for this photo are in 10ths of an inch). <<< This shows a comparison between the OEM combustion chambers (51.7 cc) and the modified ones (59 cc).  Also, it's easy to see the difference between the big coolant passage (BCP) head and the more desireable small coolant passage (SCP) head. Why is the Small Coolant Passage head better?  It is considered to be a stronger design that is less prone to cracking. When did this change occur?  One Turbobricks subscriber wrote: "I have a 398 head that is BCP dated 3/3/84... and a 398 head that is SCP dated 4/12/84."  I also have a SCP 398 head I pulled from a Pick-A-Part that is dated 4/4/84.   Obviously the change occured between March 3 and April 4, 1984.
Where can you find the date code?  It's molded into the aluminum on the exhaust port side very close to the back of the head.  The numbers are vertical, i.e.: for my 4/4/84 head, you can see a "4", then below that a "4", then below that an "84". 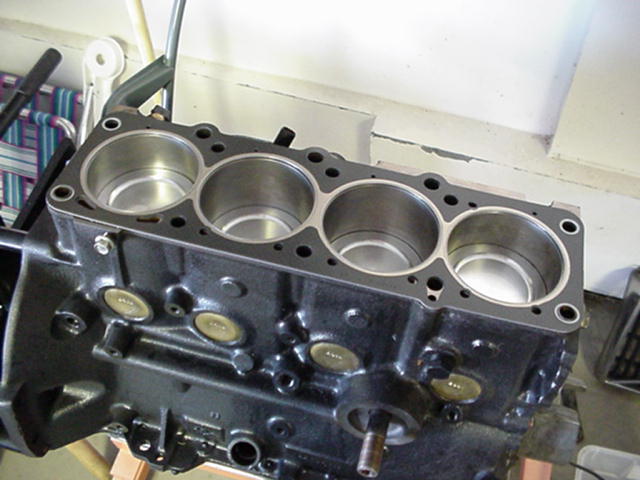 Head Gasket:  The head gasket I used was the "cutting edge" type, which actually has a hardened steel fire ring that cuts into the soft aluminum and seals the head.  It's designed for very high 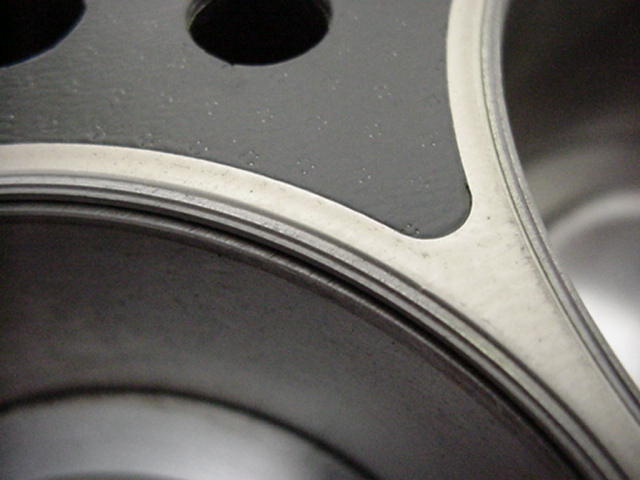 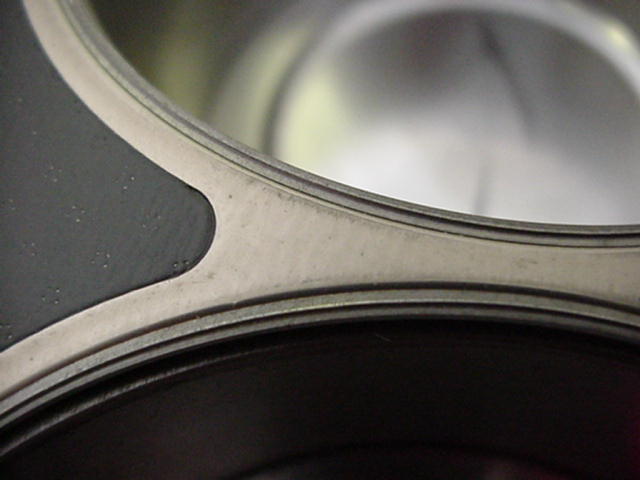 Camshaft:  The camshaft I used for this motor is the Unitek Phase One.  It is an aftermarket cam that works very well with a turbocharged engine.  It has almost 12 mm of lift and very short duration.  It completely blows away other cams I have experienced.  It may be ordered from Unitek in Sweden.