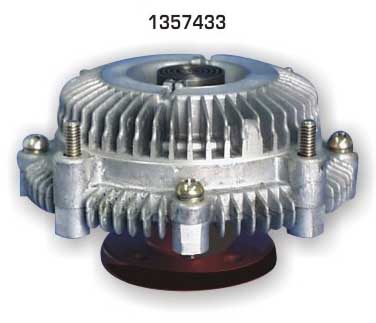 Has your original 240 or 740 fan clutch ever been replaced?  They don't last forever.  Chances are, if it's original, it's worn out. In 2003 I purchased a pristine '84 242 Turbo.  I noticed elevated coolant temperatures (well above the middle) in the summer while running the A/C or when driving up long grades on the freeway.  I decided something needed to be done.  I already had a heavy-duty 3-row Nissens radiator in the car, so why was it running hot?  I fitted a 180 degree thermostat (the original was 192 deg.).  I think it helped a little, but it was still running hot when subjected to moderate loads during warm days, especially if I turned on the A/C.  If I drove up a grade I had to keep a constant eye on the temp gauge.  I considered going to a primary electric puller fan, but I really wanted to keep the car original.  I decided it was time to replace the fan clutch, as I had heard the original ones didn't pull air as well as when new.  As far as I knew, the fan clutch in my car was an original 1984 part. I lived in an area of Southern California that easily got over 100 degrees (F) in the summer.  I thought about buying a new "stock" type fan clutch.  But what if I spent the money and it was only a small improvement?   Or no improvement?  It might still run too hot and all that money would be wasted.  I decided to try a Volvo TROPICAL, HEAVY DUTY FAN CLUTCH.  It's an original Volvo item,  made by Aisin for Volvos in hotter (tropical) climates.  And since Aisin is the original Volvo part manufacturer, it should last!   I was pleasantly surprised by the result... it pulls noticeably more air when needed.   It probably makes a little more "whooosh" sound as the engine revs up, but I think that can be expected, since it is moving more air through the radiator.  I was so impressed by its performance that I located a supplier and decided to start offering them here.

Before installing this new fan clutch, my temperature gauge would often climb above the middle.  Now it consistently stays below 9 o'clock, even on a very hot day, AND EVEN WITH MY AIR-CONDITIONER GOING. Dave's Tropical Fan Clutch Testimonial:

In April 2008, I drove my 242 Turbo to the Davis Volvo Meet in Northern California.  It was pretty warm coming back home through Bakersfield on Sunday afternoon (90 plus degrees) and I had the A/C going strong.  When I started up the Grapevine on I-5 (a notorious, long, steep grade for about 15 miles), I left the A/C on, stayed in the FAST lane, and kept my speed up in the 70-80 mph range (boost was consistently up around 7-10 psi for extended periods of time).  Most other 240 Turbos would see the temp rising steadily all the way to the red in this situation (mine sure would have when I first bought it).  My temp gauge went up slightly, maybe 10-15 degrees, then stayed put all the way up and over the grade.  I was never more proud of the old Turbo.  My passenger, who also owned two 240 Turbos and knows well what he should have seen the gauge do, couldn't believe his eyes.
I'm pretty sure the fan clutch was responsible for this modern Volvo miracle, since it's the ONLY thing I had added to the cooling system (except for a new Nissens 3-row radiator when the existing one started seeping).  But keep in mind, this car DID already have a Nissens 3-row radiator when I bought it.  It used to run hot with that.  But not any more.  Adding the fan clutch made a noticeable difference in this car for sure.
-Dave

"I'm writing to tell the story of my two 240 wagons ('83 and '86 both stick shifts).   Over the last two years, I bought two 240 wagons for around $500 each. Needless to say they both needed a fair amount of TLC to get them back to top-running condition.  Anyway I was pretty happy with the way they both ran with one exception -- they ran hot.  The '83 was worse than the '86 but they were both bad. Cold thermostats didn't really help once the mercury got up there and we wanted to use the A/C.        "Being a scientifically minded cat, I thought I'd try an experiment. On the '83 I installed a refurbished all-metal three core radiator and one of your tropical fan clutches.  The '86 got the same radiator setup plus an electric fan conversion as discussed on your site.  Both work pretty well now but there is no question in my mind that the tropical fan clutch setup is vastly superior.  We drove it to San Diego from Tucson in 100+ fahrenheit weather a month ago with the A/C on all the way.  The temp gauge didn't even make it to halfway.  The electric fan car works fine but under stress it still creeps past the mid-line occasionally.  The bottom line is that the tropical fan clutch is the better solution.  My only issue is that under most circumstances the car hardly gets to operating temperature.  I may have to put a regular thermostat back in it during the winter months.       "I've already sold several of the guys around here on your fan clutches.  Oddly it wasn't well known information around here; only one of the mechanics who had worked Volvos in New Mexico had heard of the heavy duty clutches."
N.S., Tucson, AZ

"Tonight I took my teenage son on a driving lesson.  We spent an hour and a half doing parallel parking.  The ambient temps were 85 degrees F, and the A/C was on. The temp gauge never went above about 9:30... and in the past, when I've done a lot of stop and go, the needle would almost go into the red.  The thing should have melted down.  It didn't.  Verdict: The fan clutch works."  T.A., Saint Paul, MN


NOTE: Regarding testing your old fan clutch and useless internet articles:
I have received a number of emails from people who want to find a way to positively determine if their old fan clutch is worn out before they commit to buying another.   For most fan clutches, it's very difficult to measure any function or efficiency, since fan clutches are pretty mysterious.   A search through the internet doesn't help much at all, because you will find articles that tell you,  "...if the fan can be spun by hand... if it makes more than 5 turns after the engine is off.... etc., then it's worn out."  Most of these articles are crap.

I have also had some determined customers, who have installed this new fan clutch and, after reading some of these misleading articles (or after talking to a "mechanic friend" who read an article) come to the conclusion the new tropical clutch must be defective because it spins a certain way after revving or idling, as mentioned in some article.  What I always tell these people to do is go out and drive the car and see if it does it's job.  This always results in a change of attitude, because these fan clutches do work well, regardless of the mysteries behind them.

But if you must know how to test a fan clutch... their are occasionally some accurate articles found on the internet on fan clutch function and which include methods of testing fan clutches the proper way using a temperature probe and photo-tachometer. OLDER 240's: Some 1976-1979 240 models were equipped with a one-piece clutch/fan unit, identified by a fan with aluminum blades. These parts are no longer available that I know of.  To upgrade to the later type of fan clutch (such as this one here), you will need to locate the plastic fan and four 6mm studs with nuts for mounting the clutch to the water pump flange.  IPD has these parts:  www.IPDUSA.com.
INSTRUCTIONS FOR REPLACING FAN CLUTCH 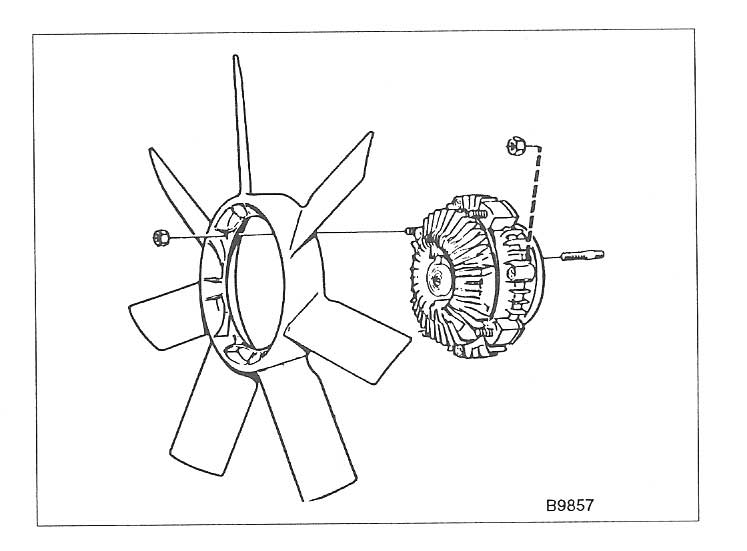